The story of the building of Sky Villa is an interesting one.

Hugh and Ourania had met and fallen in love 10 years previously and decided to move to the island which Ourania was connected to through her mother. They bought a beautiful piece of land which held fond childhood memories for Ourania , in order to build a family home.

In the meantime they had met and become friends with Peter and Dorothea Haupt , architects from Berlin. They were some of the first “foreigners” to arrive and fall in love with Ios during the 1970’s. They had charmingly renovated an old village house and were happy to take on the new project. 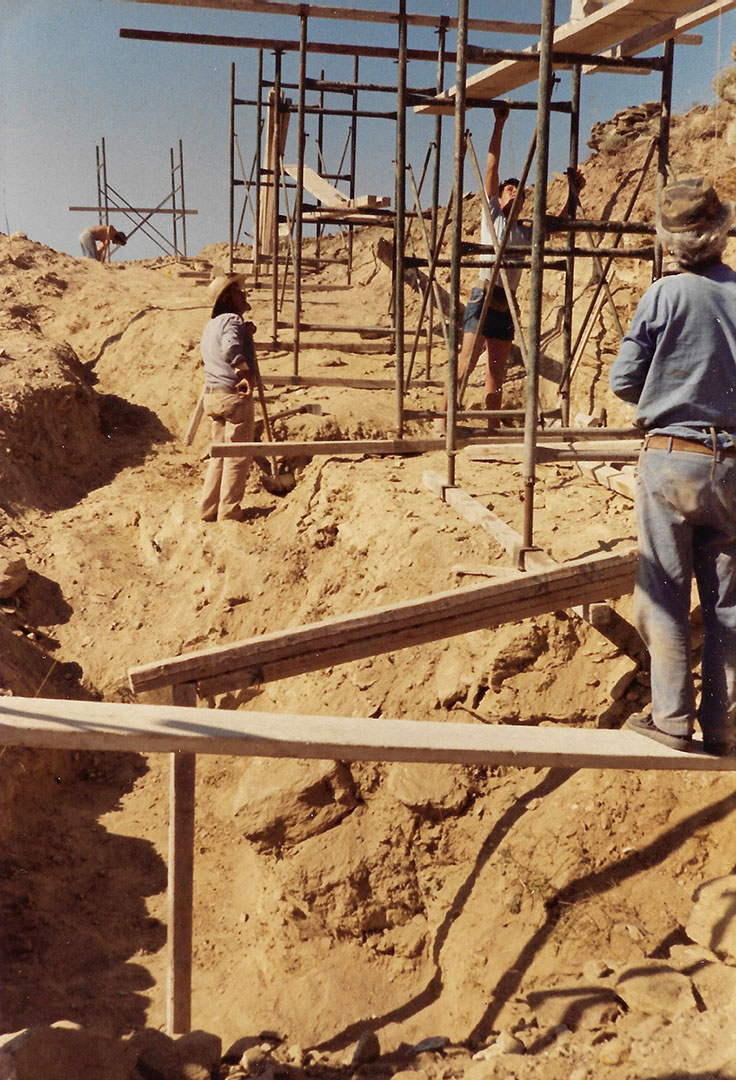 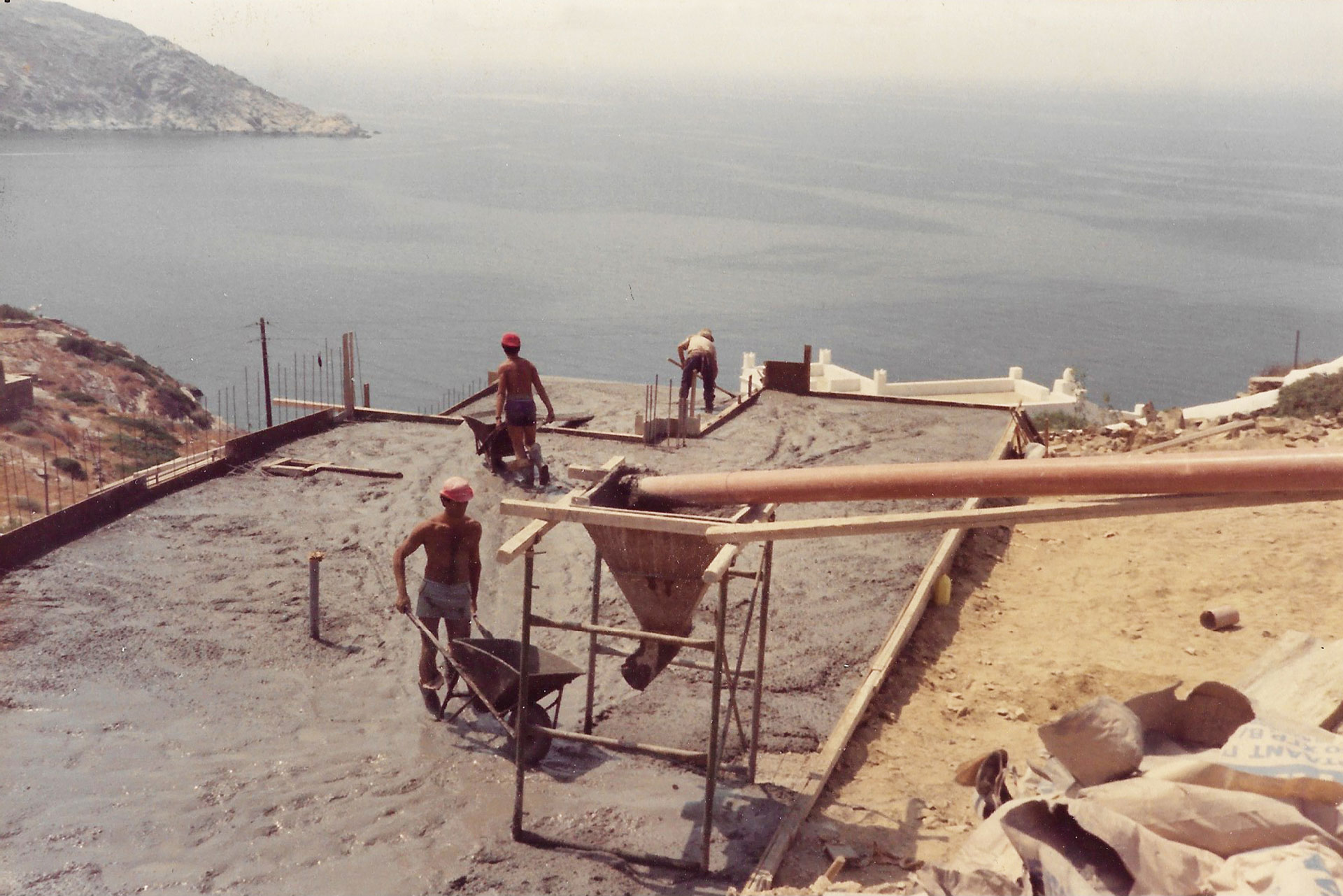 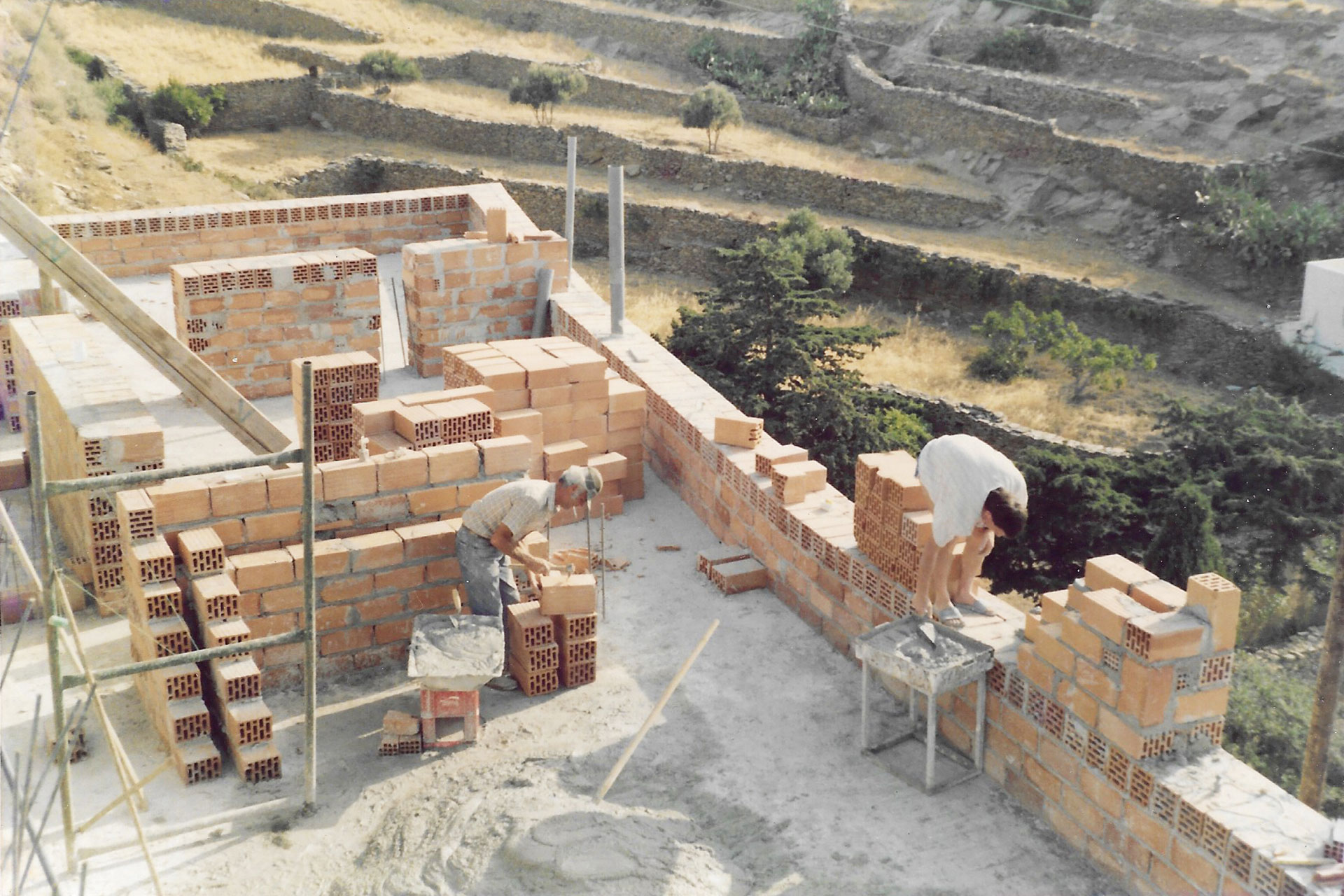 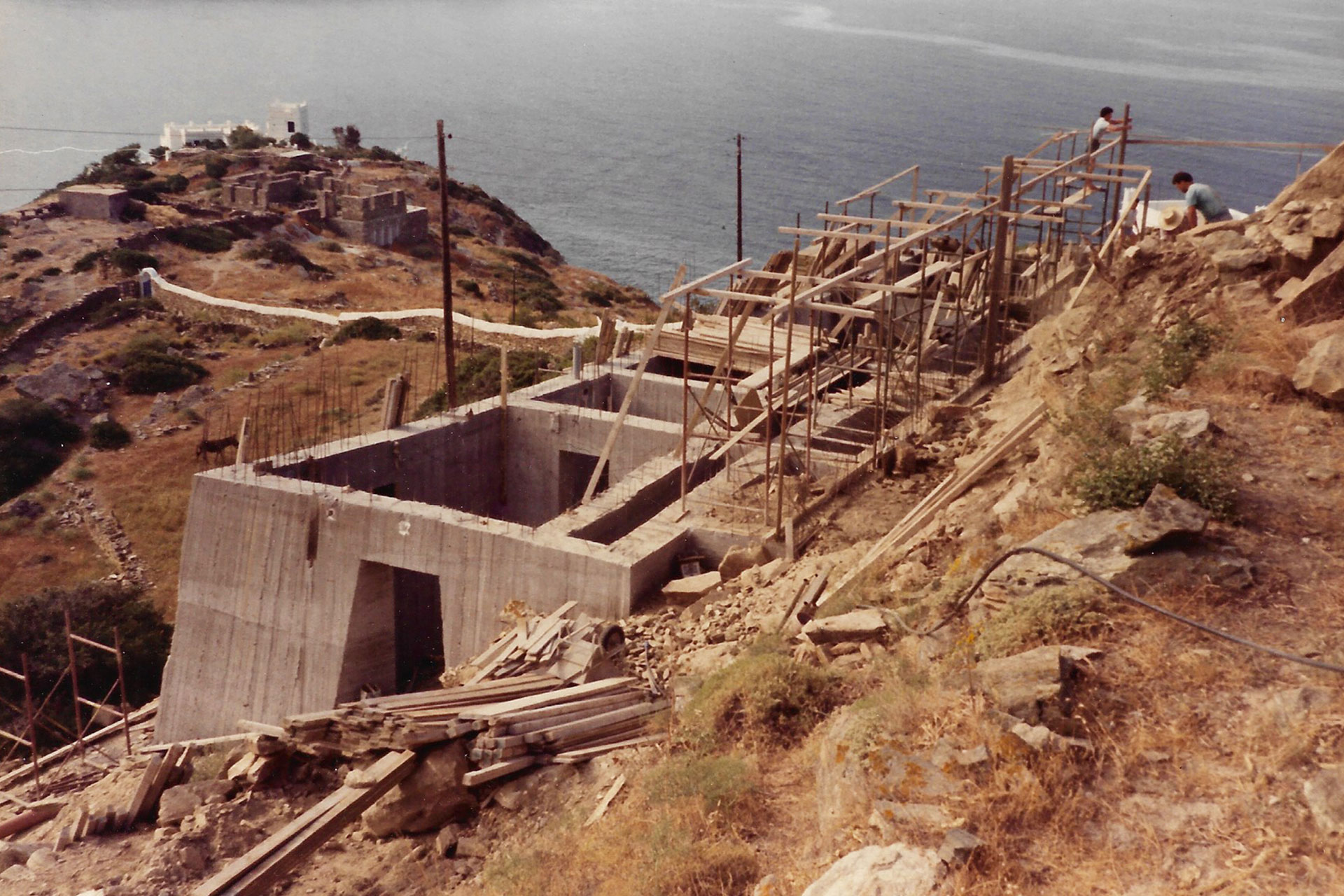 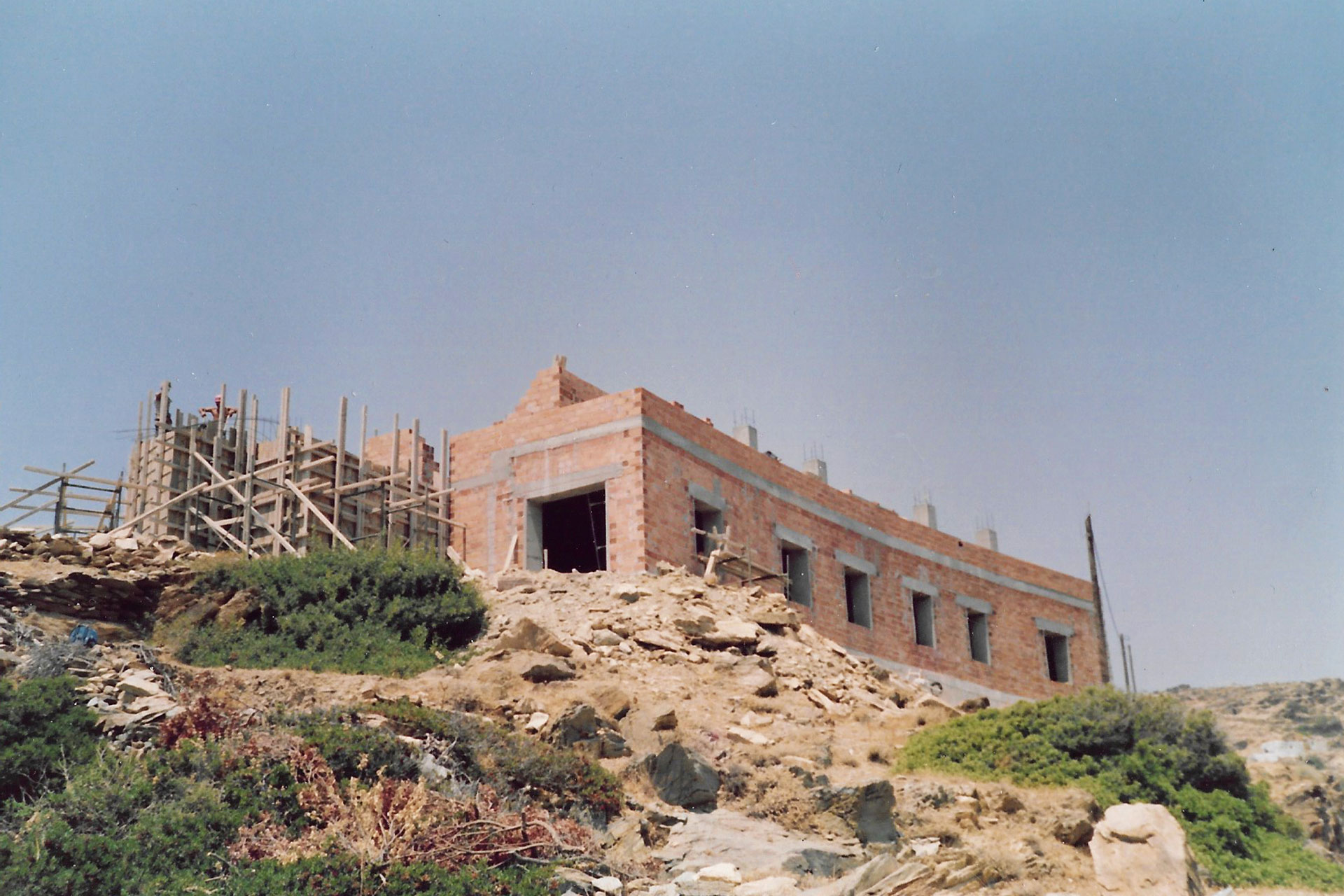 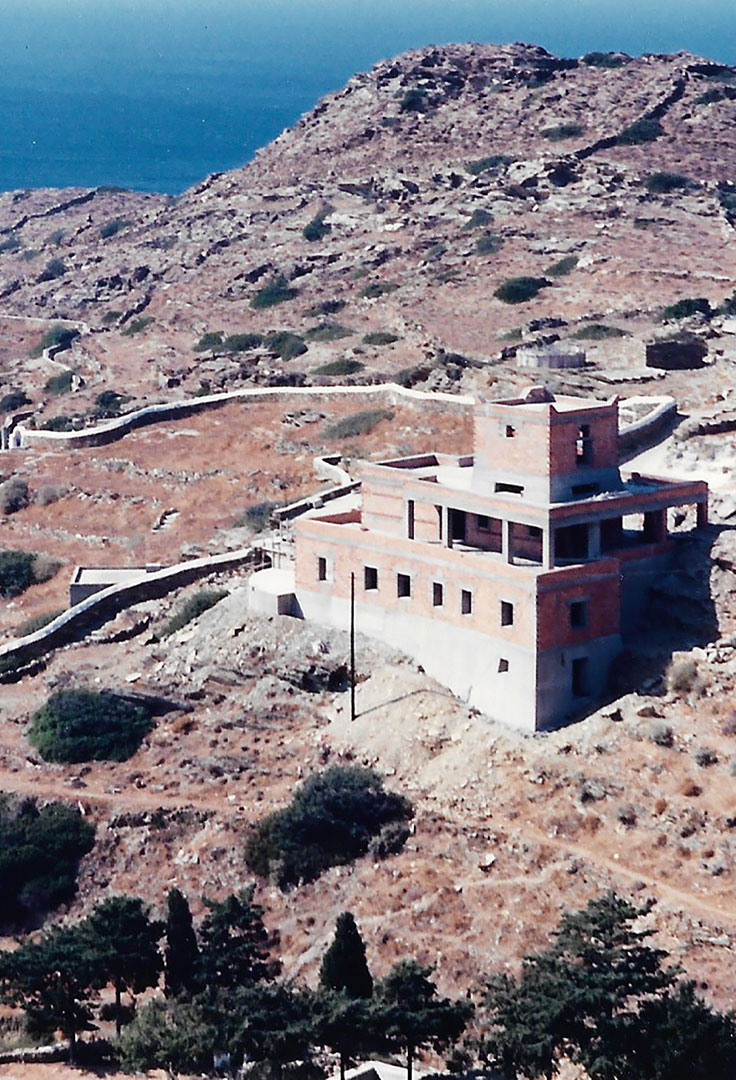 It was a difficult beginning, as the land was very steep and both architect and owner were agreed that the house should be “planted” on the existing landscape rather than disrupting the land to accommodate the house. Many hours were spent creating this solution which resulted in a dynamic and elegant structure.

Building the house was also an experience , construction methods were still very simple, small cement mixers, wheelbarrows and where necessary a bucket of concrete hefted onto the shoulder in order to reach its destination. It was an exciting summer!

We use cookies on our website to give you the most relevant experience by remembering your preferences and repeat visits. By clicking “Accept All”, you consent to the use of ALL the cookies. However, you may visit "Cookie Settings" to provide a controlled consent.
Cookie SettingsAccept All
Manage consent

This website uses cookies to improve your experience while you navigate through the website. Out of these, the cookies that are categorized as necessary are stored on your browser as they are essential for the working of basic functionalities of the website. We also use third-party cookies that help us analyze and understand how you use this website. These cookies will be stored in your browser only with your consent. You also have the option to opt-out of these cookies. But opting out of some of these cookies may affect your browsing experience.
Necessary Always Enabled
Necessary cookies are absolutely essential for the website to function properly. These cookies ensure basic functionalities and security features of the website, anonymously.
Functional
Functional cookies help to perform certain functionalities like sharing the content of the website on social media platforms, collect feedbacks, and other third-party features.
Performance
Performance cookies are used to understand and analyze the key performance indexes of the website which helps in delivering a better user experience for the visitors.
Analytics
Analytical cookies are used to understand how visitors interact with the website. These cookies help provide information on metrics the number of visitors, bounce rate, traffic source, etc.
Advertisement
Advertisement cookies are used to provide visitors with relevant ads and marketing campaigns. These cookies track visitors across websites and collect information to provide customized ads.
Others
Other uncategorized cookies are those that are being analyzed and have not been classified into a category as yet.
SAVE & ACCEPT
error: Content is protected !!